The Response I got...

Was one of the nicest feelings ever.

when i showed my Final Project Work to some children. its like All the Stick ive been getting, all the rejections, all the failures that I thought i got this year were completely STOMPED ON.

They loved it, interacted with it and were inspired from it, and the best thing about it is that it was aimed at them! I guess i was trying so hard to connect with myself at there age i can understand why adults wouldnt get it.


What really got me is the fact that i felt like i told a story, that people could understand, especially the people who it was aimed at. A well done mural! created by a lil artist ! its his BIG imagination.

I gotta make sure i keep this mentality for my year out!
Posted by Wumi at 19:32 1 comment: 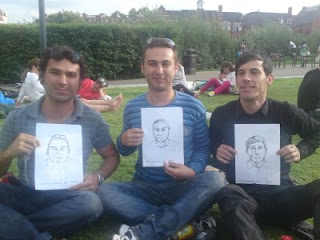 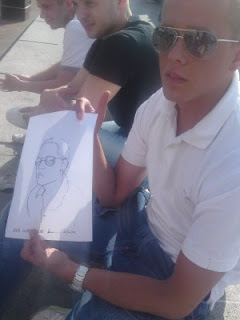 Believe it or not ive been really productive over the Weeks i havent put anything up here. Ive had work in an art show :D Had my Drawn together Event, and Got into a university......

Ill start by SHOWIN the Results from the Drawn together tour that actually went BRILLIANT!
Its interestinfg how some of the pictures i created were really fun to draw, were as others, would be quite annouying because maybe i wasnt looking as much as i was drawing. Its funny how my life drawning roots have a big effect on the way that i create theses images. and when i stray away from that concerntrations, things get a little more expression. when that happens the drawings could go either way.

Most of the tour was done on south bank. it was a killer location! as in on the 4 ddays that we did touring, the most successfull days were when we were there.

IT was her birthday! she liked it alot actually :) and she knows about arty things so it was nice to know that she was happy with portrait.

This was ALOT of FUN! Guys were easy cause you dont have to worry bout making them pretty haha.

MANGA-KAN! this dude was from singapore! what was cool about this dude was the way that he ended up looking like a living manka character....
Posted by Wumi at 14:41 No comments: