Boxpark Exhibition went down a hit!

I work at a place called GameBoxpark, which specialises in Xbox Games. They asked me to create an exhibition for the brand that will go up for a month. So I got 10 artists together in a project celebrating the past present and future of XBOX.

Had a lot of fun creating this piece. Derek Yates [my old Tutor at camberwell] made me laugh. He said "You finished it!" LOOOOL..... i never finished things in Uni

Anyway, the piece is about two future XboxOne games called Titanfall [the most anticipated game of Next-Gen] and Ryse: Son of Rome [one of the least.... but hey, romans verse Robots!]

The show went really well. One of the best ones Ive had. I guess its because I didn't have to deal with any of the financial stuff. This allowed me to concentrate on the creative side of thing, which included finding the right artists to work with an working on something your excited about.

We also made AWESOME T-shirts from the work we made thanks to YrStore.

The Creative Gamer Gang Wearing their artwork! which you can buy from us :D

Piece A0 ! never had my work that big before haha!

I feel like this year has been an increadibe year for my creativity and my career path, and it feels like it will continue. Thank God for everyday! and I hope to continue to learn and grow in this Practise of illustration, Animation and Storytelling!

Make sure you get to the Exhibition at Boxpark in Shoredtich  2-10 Bethnal Green Road London. Check out all the other artists work!

Trying to go with that metal gear Solid art work look with this Ryse vs Titanfall Image. Well see how it turns out sooner or later. 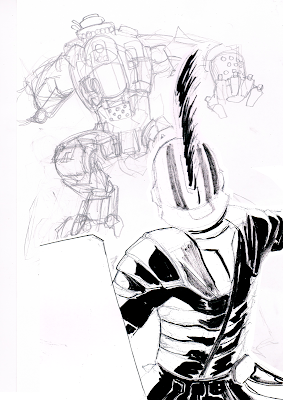 We were looking for some legal spots in the city of copenhagen cause apparently danes are super serious when it comes to being caught spraying graffiti... i dont profess to be a graffiti-artist but Cans are Fun and we managed to find a spot where a Railway company[the people who hate the Graffiti crews the most] were organising artists from around the world to paint a designated area.... Without permission from the officials we found a spot on the same wall. The artists were cool, lets just hope the officials were to.
PRIME REAL ESTATE
Mural spray-painted with Montana Black[never used before, that high pressure shiz]] in Norrebro park, Copenhagan 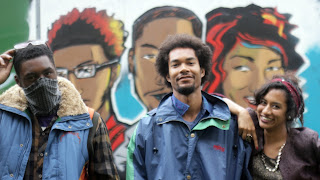 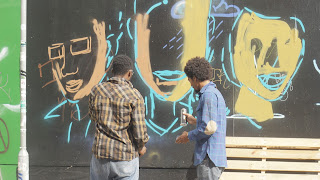 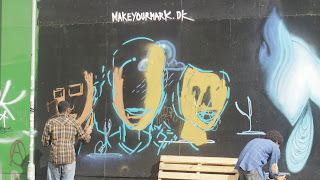 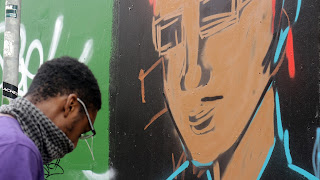 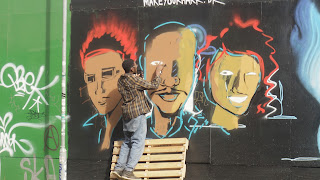 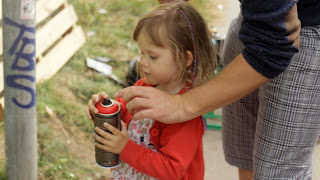 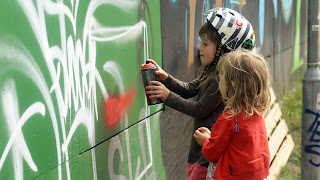 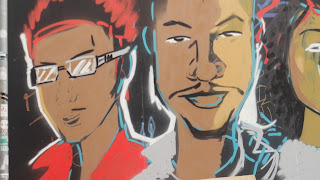 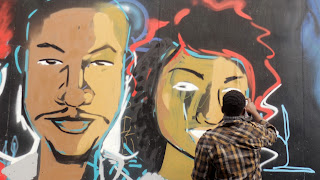 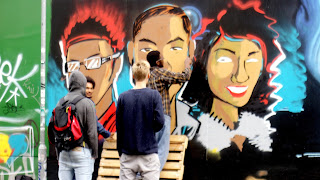 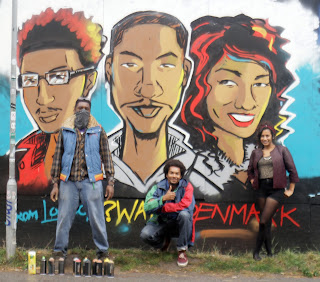 PS. HIPHOP is like the BEST THING to listen to when you wanna spray paint.... Its just works!
Posted by Unknown at 17:42 1 comment:

This started off as a idea sketch for someone elses project, but ive sort of fallen inlove with it! and now its become a possible character for my SOONCOMING comic/Game/Animation/Idea Ive had in my head for the past 2 years! Its 4:30AM WHAT AM I DOING UP haha. friends tell me its because theirs a new moon....

he was supposed to be a mix between an eco warrior and an Economy man.....[ecohustler]

Its great to have a Muse, Hiatus Kaiyote Mural

Fancy that! they actually came to check out the mural :D

Music funnily enough is a great muse for artwork and for the past year I've listening to a lot of Hiatus Kaiyote. After hearing their album on Gilles Peterson last year it became an instant hit with me. There jazziness, funkiness and overall really well tailored contemporary sound was really refreshing and always put me in a happy mood when making work...

So I when i heard that they were coming from Melbourne Australia to do a gig Round the corner from where I HAD to do something.

After getting turned down by the venue we had to come up with our own plan... and all I can say is that  I felt hapz to see that they liked it!

Thanks for the shout-out Nai Palm! I actually was gonna call it Mobius-Streak ha ha. 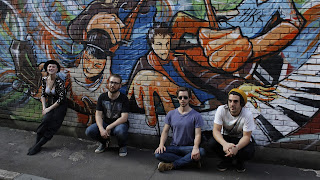 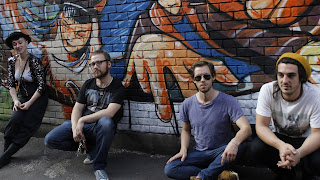 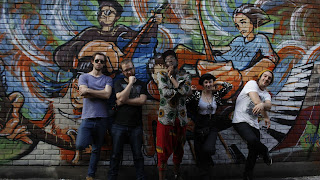 realising the importance of just creating out of love and sheer inspiration... just do it! these guys make amazing music, and it reminds me of how much i appreciate being a creative! I can just make something back!

Well done on the record deal!
Posted by Unknown at 17:58 No comments:

Journey from East To South... Whitechapel and Wapping

Heres my work for the Journey from east to south #100wordpilgrimage project.

Its an expansion of the project Beddow n Battini started last year. this Time We made the work and Hatched Gallery curated. If you download App Aurasma onto your smart Devise and Follow 100wordpilgrimage. you will find something special!

This piece is the more traditional Wumzum aesthetic, with a real emphasis on perspective and warping. a lot of fun to animate :D I live in Whitechapel... this piece sort of talks about the Secret Vietnamese community....

The second piece was based around Wapping. A particular area of Wapping where the shard is visible and you cross Tobacco Dock. I really wanted to experiment with the way I piece things together. its sort of a new approach that Im taking with a lot of my work.

For more information Go to: www.100wordpilgrimage.com and follow us @bnbstudios on twitter.
Posted by Unknown at 13:25 No comments:

So We Won an Award!


BeddownBattini Was a creative Collective started by myself and Adeeb Warren. An artist and a Writer starting an art collective with a specific angle on strying to tell stories. Both Londoners, Both hung out in the same areas, liked the same films, introduced each other to all sorts of music, and both had stories we wanted to create.

The City was a Great influence and as well as big films and features, our most inspiring ventures were always the projects/exhibitions that people we knew and were connected to. Whether it be an exhibition at a local cafe, a pop up shop show, or Monorex Streetart Projects, It was always things that people started from ground up that really made us want to just make things happen, and get others involved.


So when we got BnB started we made sure we utilized the networks we had, and made new ones through them too. Its really a good idea to Know what all yah friends are up to if your a young person. especially in the arts. Around this time we were also in a year out and doing a lot of work with a youth empowering charity called Envision. Its always good to have worked with a charity before :) We Did designs, films, and talks with them.

So whats the Award about then???

Jack Petchey Award for achivements in inspiring young people. :D Envision nominated us for this award and we won it :) meaning we get £200 to spend on producing a project that benefits young people! SWEEEEEET! Ive just been doing what I Love. Were always looking for fundingfor projects.


We celebrated by going to see StarTrek Into Darkness :D
awesome movie.... but it doesnt answer how were gonna spend the money :P
Posted by Wumi at 16:56 No comments:

This was some work i made for someone..... wasnt what they were looking for... back to the drawing board! Sort if influenced by castle in the sky/skylanders and dragonball

Getting aquatinted with Angles and Perspectives

Im working with Perspectives.
I happen to think Im getting pretty good at it. And colouring...

the Artwork for the Happening Work in Progress

That Project was pretty looong! i still haven't finished the animation!
Posted by Wumi at 06:25 No comments:

Travis Sketch - Can you read whats in his hair

I think I Need to draw a lot more when I'm Relaxed!
A Sketch I did with a friend. Im really trying to understand how to think when it comes to perspective and movement. Im not even an animator!
Posted by Wumi at 06:09 No comments:

Were Doing a series of Moving sequential illustration for a Special Music/Art Gig at ????? not alowd to say.

Heres some of the concepts were working on to do with the music. 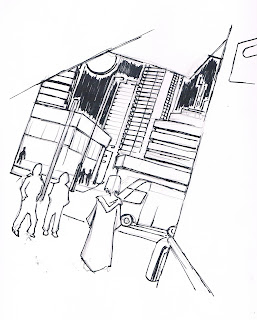 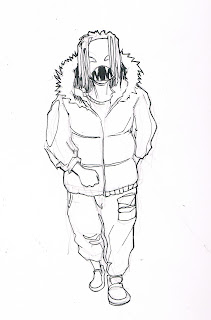 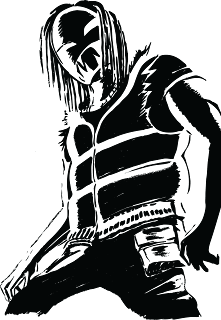 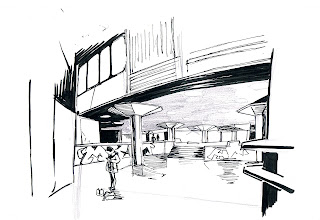 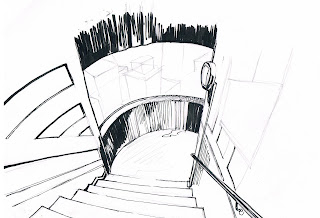 Fully Enjoyed Bladerunner! to think that that was one of the last films to not use digital techniques to make the world is crazy. it looks so much more authentic then Alot of 3D films made now days, and the city had sooo much character!
Posted by Wumi at 09:26 No comments: