interesting street finds that have been useful 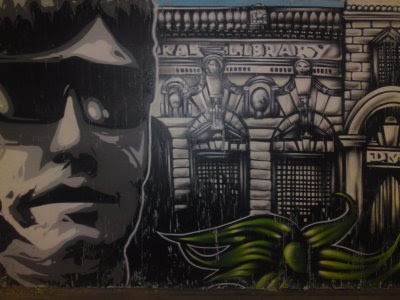 I suppose this could be seen as just another Graffiti picture. but this Mural in Hollerway Had a Strong formation to it. not only is it rich in detail, but its Quite Strong with the layers. YOu get a sence of distance with the subjects in the picture. i think its the lines around the man and the flower, the fact that there grey/white and underneath them have a black thickness makes them stand out. Similar in a way to the Indian Epics i looked at earlyer, but whats different here is that the Western approach with the subjects gives it a different depth... a 2D to 3D depth.... like a 3D cartoon.

I suppose I draw in that western way and it would be usefull to try and experiment with Both more on a sheet to see what works best with my idea. i feel like i want it to be PACKED. 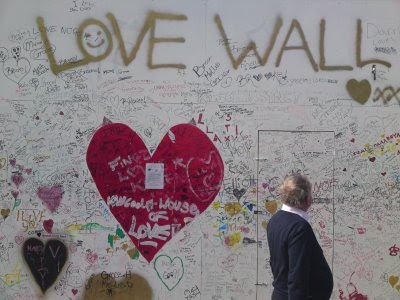 Im finding it funny how im actually analysing everything now. this was just a plain and simple wall that had been VANDALISED. But the thought of it being done on a wall probably got me interested, and how the Theme of LOVE was Repeated, that repetition is nice and relevent. however obviously composition spoils the idea! nice to see how some people were smart to put the RED HEART to Make the Text more visible, rather than all the other tags dissappearing into the white. At Angel!
makes me thing about how i would want something to be bold... 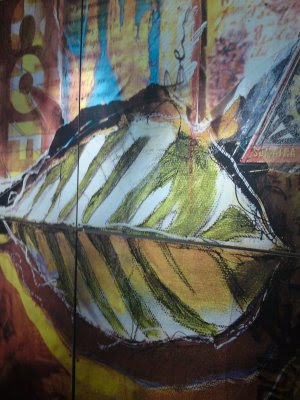 STARBUCKS! this is REALLY interesting... cause i can actually tell that its been blown up in scale and not exactly done on the wall. Obviously printed graphic design but im actually interested in the layers. it looks like it had been drawn over and over again. theres a whole theme and feeling given because of the layers and colours. I wish i took a picture of the whole wall to show you guys it was something that i dont ususally work with but it could prove benificial to make a collage of things that i am/was interd in and Blow it up. it has a different way of layering, and looking at creating space from the first mural i showed, but Colour is a main factor in both, Something i definetly need to look into.
How colour seperates dimentions.
Fundimentally id want to invite people into a world.. and not necesarily make them feel different or distant from it so the 3D approch is where im egding. 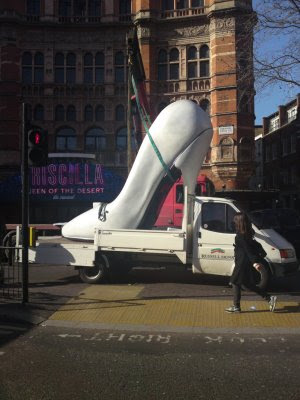 And this.... its a BIG SHOE! i liked big stuff when i first worked on this project. ion the way to leister square!
Posted by Wumi at 08:44