Mark Wigan and me

Im finding things hard at the moment!
Maybe its jsut because i dont feel like things are going consistently, but i feel like theres a gap..... not a gap in research, but probably more in the development side of things. ive done quite a bit of experimenting with this whole wall thing, and ive got images in my head of what i want. getting them down wouldnt be hard but then i know ill feel stuck because ive already come up with something.

Making the Toy was interesting because i was then able to modify and change what i wanted to say with it, and if i had a scanner that was working i would show you what I have done to it and how i plan on develping Zeek. i guess i should be doing the same with the actual mural...

My experimentation with the mural has actually been odd... the other day i helped with the painting of a friends bathroom thinkin i could tie it nicly with how to draw on walls. the results were quite interesting. 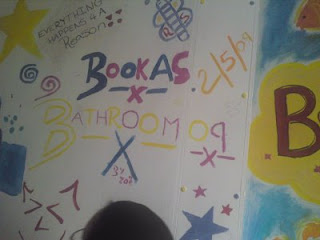 Her colourfull bathroom thanks to us... it coulda all gon pair shape since we didnt have aplan but i think we all had an idea of compasition. 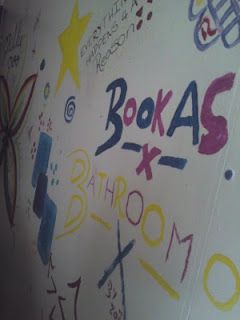 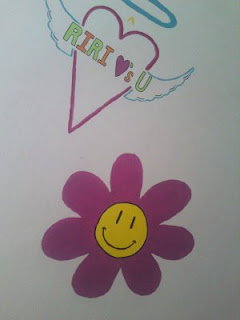 Certain pictures worked really well with white space, where as others were only as effective with a collection os similar images. some repeated paturns were really good.
whats actually even more interesting
has got to be some of the stuff that ive seen when looking up.... These odd Random cutural illustrators, that like using big thick lines! and Bold colour.

well their not really random, because there stuff/style is being used all the time. Very different from alot of the Secret wars stuff i looked at eariler in the project. They have quite a simple style but a really bold message, or they seem to have on. 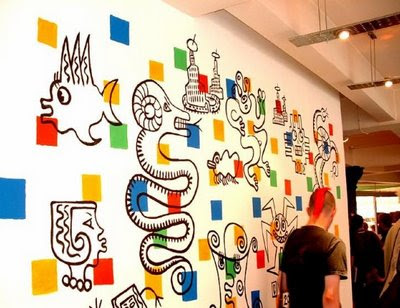 Mark Wigan... didnt even need to use colour on the images... but it has a nice pattern to it. i think ti works better this way because gain use of white, making things alot more simple and in a way alowing the images to relate to other. it makes me feel that i should be using colour in an interestign way aswell as the lines that i wish to create, thickness spacing and the seriousness of the images used play an important part in it coming together.

Relations and Relevance:
- The 2d elements of it remind me of some of the Epics ive been looking it, especially the one from thailand that worked in a smilar way. im not sure of the story but the ideas are there.

- Colours are nicley put, more of his work has a bold look that would stand out amongst alot of works. Primary colours have a Strongness about them. The relevance here is that i think that primary colours would be something to think about, interms of how to work with the idea of imagenation and play.

:edit:
This is particualy done well in this work. The colours really make it feel like theres alot going on and work with vibrancy. 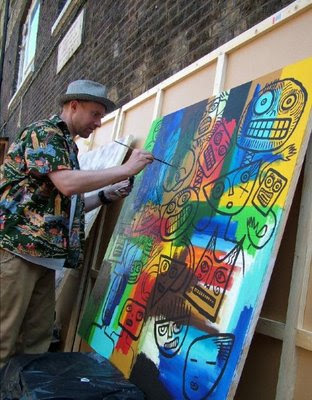 i think ill go down B&Q and get some of that paint!and have 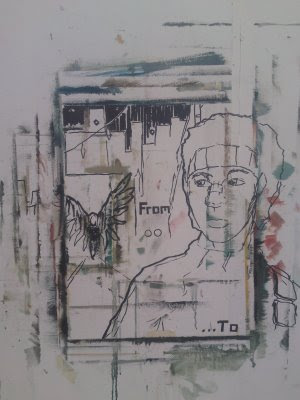 The paintin room... second favoraite place in camberwell, has all sorts of marks and colours on it that set the mood. the marks were the thing that actually inspiored the mood of the picture, and it worked on the Breaking the limit idea.
Setting things in a frame was something i wanted to work with...or breaking one. I dont think this worked aswell as Wigams pieces probably because the Density of the lines dont make up for the Lack of colour... but this was an experiment.
Posted by Wumi at 14:04