Were making the wall! Yup its gonna be made out of loads of little pieces of wood since i cant afford any massive planks. but fundamentally i think that it works well with the idea of of making things, rather than just getting a wall to paint on, doing that kind of kills the whole idea of sock boy Zeek. So it would make a nice change from the typical canvas!

Anyway, the scrap hunting has been harder than i thought it would since ive had to think bout sizing things up! but ive been trying to sort all of that out in another sketch book.

Another thing thats been frustrating is that i cannot get the Overhead projector Till WEDNESDAY! which means 2 very valuable studio days with no massive projective experimentations. so in the meantime ive been focusing the studio time on making the wall, and trying to fully finish the Design of the mural. i wanted to make the contrast between makign and the graphics really strong, and effective at the same time. Ive been experimenting with Paper..... *loser* but seriously, on Paint there is this option to split the picture into loads of different A4 pieces. this kinda emulates the idea with the wall so i thought id give it a go. 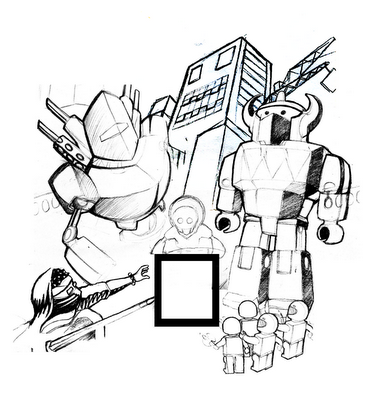 The image its more of a complete mash up of the individual ideas i had. i think there there needs to be a lot more depth to it... maybe i need to ad more things.. or be more picki with the lines
Posted by Wumi at 14:16