It comes back to this!i found two really important images that just sums up things through style and communication. ive been battling with the ideas. trying to figure out how im going to style the piece. These piece both have things about them that appeal to me and the way i wish to present my piece. First of their both Murals! th first on a Ceiling and another on a wall. BIG SCALE :D
Mcfaul Studios 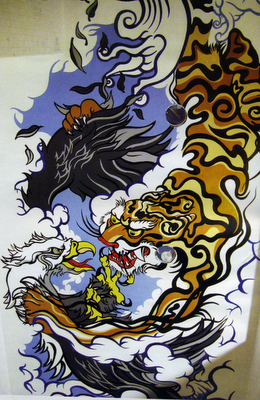 These guys jsut did an awsome job on the ceiling. A mural for two kids on there bed room ceiling. I think what fundimentally stricks me about the image is the Feirce lines and colours used. There is that Primary colour scheme that really appeals to me, from lookin at both Keith Herings works and Mark Wigans murals. It really has a boldness to it which gives me confidence in working with simple colours. i was initially afriad of not going into details and heavy colour schemes because i thought i would loose the detail in the ideas, i thought i had to be vivid with the colours, but this proves that i just need to have something to balance the Brighhtness of the simple colours used.

And to compliment that, i would neeeeeeed to use BLACK! and in a CLEVER way. not sticking to the same sized lines, varying it about depending on the imapace i wish to make. There is a keen relationship with this image and the Epics that i have been looking at. I was talking earlyier about how there was an obvious difference from western art to Indian/worldly epics, mainly because of the way that they creat images from a 2d - 3d understanding. This piece is massive and epic yet works in the similar style to thoses Worldly epics of Rama, and they have done this with colour as well as lines. it you look carefully there are some lines that arent black, but are a different colour, this stops it from being flat.

SORRY FOR WRITING SO MUCH PEOPLE! i know ma vocab is terrible >_< 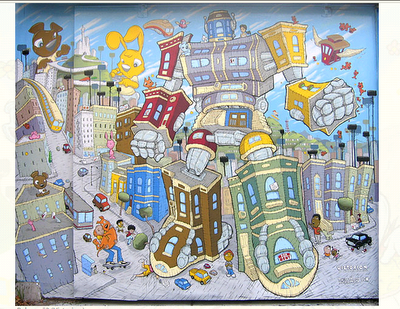 This IS EFFECTIVE. The idea is so solid, that it reminds me of mine, and what im trying to do. Its A Giant ROBOT! if you didnt notice already, that is entirly made out of houses! I have a Robot made out of houses in my Worksheets, but their no where near as thought about as this is. Another relevent mural artist that obviously liked powerrangers as a child aswell hehe. The idea is fleshed out so well, like the way a childs mind would work, seeing something that could be made out of anything. Alot like how i made my mini-me zeek. Most people i showed this image too didnt even notice what it was untill a second or third look, and thats probably part of the novelty. kids see stuff that we dont.

As well as the main attraction the theme of adding things from childhood is repeated witht the mini version of shaggy and scoobydoo in bottom left. Thowing things in there as obviouse reference can be just as effective as complex ways of telling a story, heck, I even think that thoses Colourful Creatures the illustrators got dotted around are infact HIS MINI-ME! They tell the story as if there screwing about with the City and made that robot. see them in the Top left corner of the picture. This is helpfull as ive oftern been worried about how to show that my mini me sees the climbing frames as a mountain. Maybe i would think about actaully putting him in the piece, or loads of him...

When originally writing up with post i thought that id have to choose what id go for.... Stlye OR Communication, since im only in foundation i thought it would be best if i go Communication but seen as when ever i go too far on communication i dont execute it well. And when seeing the Ceiling Drawing i thought i would pick style for this round.... but through typing this up, i figured that i could really[with loadsa tests] come up with a combination.

*smiles* someone best be reading this... took me ages.